Vitamin deficiencies and excessesToday we are talking about vitamins, which must be consumed in food because our body is unable to digest them on their own.

Today we are talking about vitamins, which must be consumed in food because our body is unable to digest them on their own.

The quantities our bodies require are usually very limited, only a few milligrams or sometimes even micrograms.

The clinical condition caused by vitamin deficiency is known as avitaminosis, while the excessive consumption of vitamins is called hypervitaminosis.

Excessive use of vitamins can cause toxic effects on the body, especially with regard to fat-soluble (A, D, K) vitamins, while water-soluble vitamins (B, C, folic acid etc.) are more easily expelled from our body, meaning that it’s rare for them to result in toxic side effects. Taking too many vitamins can also be a waste of money, especially when consuming excessive doses in expensive food supplements.

Let's take a quick look at what each individual vitamin does: 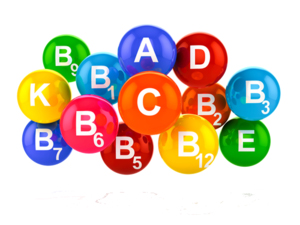 2) Vitamin D: in addition to being consumed in food, such as in egg yolks, saltwater fish and liver, it is synthesised in the skin following irradiation via ultraviolet rays. That’s why additional vitamin D consumption is usually lower in particularly sunny countries. Due to their reduced exposure to sunlight, elderly people tend to take vitamin D with food. Vitamin D is mainly linked to the metabolism of calcium, which is why deficiency is often linked to rickets (which causes less rigid and not very resistant bones) in children and osteomalacia (a predisposition to fractures) in adults.

3) Vitamin E: has antioxidant properties and (rare) deficiencies can cause nerve and muscle damage.

4) Vitamin C: is easily absorbed into the intestine and problems are therefore generally caused by an inadequate diet or increased requirements. People who exercise regularly have an increased need for vitamin C. It has antioxidant properties and a deficiency can cause fatigue, muscle weakness and a loss of appetite. In the most severe cases it can also cause scurvy as a consequence of a lack of ability to create collagen.

5) Thiamine (vitamin B1): aids the metabolism of carbohydrates and amino acids. That’s why it should be taken in greater quantities by those who eat a lot of carbohydrates, as well as when suffering from a fever, in pregnancy or when practicing intense physical activity. A deficiency in the diet can cause weakness, impaired stamina, fatigue and weight loss. In the most serious cases, it can result in mental confusion,ophthalmoplegia (loss of oculomotor coordination) and ataxia (the inability to control motor function), all of which are characteristic symptoms of Wernicke-Korsakoff Syndrome, which is very common in chronic alcoholics.

6) Riboflavin (vitamin B2): aids oxidative metabolism and the electron transport system. (Rare) deficiencies can cause changes in the skin, mucous membranes and nervous system.

7) Niacin: plays a role in oxidative metabolism and the electron transport system. Deficiency can cause irritability and pellagra in more serious cases, characterised by dermatitis, diarrhoea and dementia.

8) Pyridoxine (vitamin B6): is present in many foods meaning that deficiency is rare. It is used for gluconeogenesis and deficiency is linked to forms of dermatitis.

9) Folic Acid (vitamin B9): helps the synthesis of haemoglobin and nucleic acids. Potential deficiencies can cause anaemia and a sense of fatigue, which considerably reduces resistance in prolonged sports activities. Pregnant women need an increased amount of folic acid, which is why folic acid supplements are usually prescribed to them. Deficiencies may increase the risk of neural defects in babies.

10) Cobalamin (vitamin B12): is mainly found in meat, so deficiencies can occasionally be found in people who have been practicing a vegetarian diet for some time. Vitamin B12 helps the synthesis of haemoglobin, while a deficiency can cause anaemia and neurological symptoms.