My name is Kwadzo Klokpah and I'm 28. My country of origin is Ghana, but I have been living in Italy for 17 years and I am an Italian citizen since 2015. 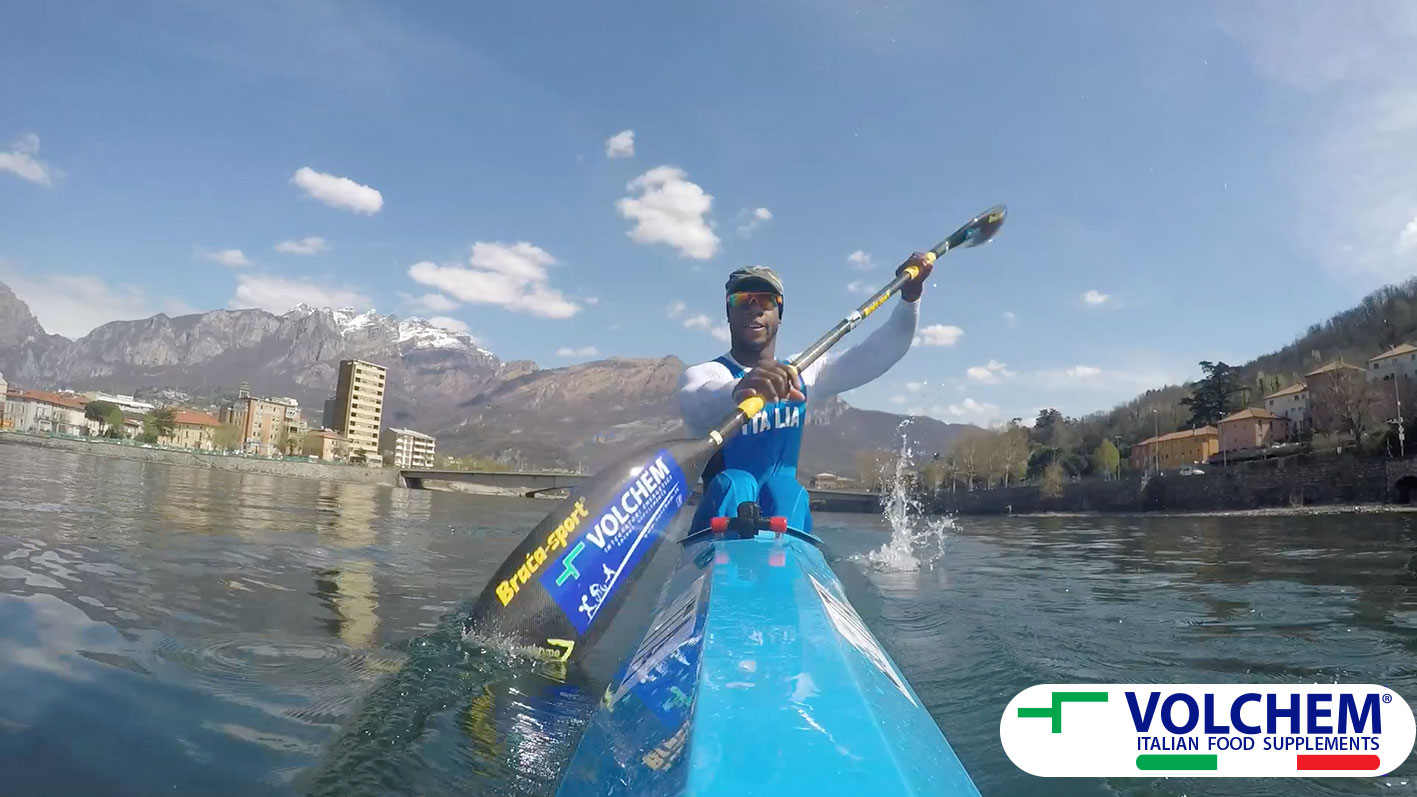 My name is Kwadzo Klokpah and I'm 28. My country of origin is Ghana, but I have been living in Italy for 17 years and I am an Italian citizen since 2015.

Canoing is my greatest passion: I started practicing two and a half years ago and I have not stopped ever since. I debuted in the Italian championship of 2016 with my current canoe club: Società Canottieri Lecco.

My case is a special one: the bones and muscles below my waste are scarcely developed. This was something new for everyone in my club and no one knew the rules to administrate a case like mine. My coach trained me with the same program and boat of my fellow athletes.

In 2016 I took the first step to participate in the competitions: a medical examination for parathletic classification which established the category I would be included in during the Italian races. There are three parathletic categories: KL1 KL2 e KL3. KL1 includes athletes with spinal injuries which preclude the use of the legs and the torso rotation; only the arms operate during physical activity. KL2 includes athletes who are not able to use their legs but can rotate the torso, which contributes to a greater strength during paddling. KL3 includes athletes with an amputated limb but with total body mobility thanks to the use of prothesis.

In national competitions the paddle parathlets can race the 1000, 500 and 200 m, while in international competition we can only concur in one distance category: the 200 m. The three parathletic categories have different mean racing times in the 200 m: 47 seconds the KL1 athletes, 41 seconds the KL2 athletes and 38 seconds the KL3 athletes. To give an idea of the difference between a KL3 athlete and a normal-bodied athlete, the mean racing time in the 200 m for a normal-bodied athlete is 36 seconds. The two seconds difference is due to the paraconoe boat with a larger and more stable keel, which makes the boat slightly slower.

All the parathlets have the same boat type, and this was an impediment during the preparation for my first Italian championship in Milan: the boat I had trained with up until that point was not accordant with the new rules. My club immediately took action in order to procure a new boat. Meanwhile I was categorized as a KL2 parathlete. While waiting for the new boat I kept training for the three distances I was going to race: 1000, 500 and 200 m. The 200 m are my speciality and it was the only distance I was hoping to win a medal in, possibly a gold one despite this being my first participation in a race.
The first day of the races the new boat had not arrived yet. I managed to borrow a boat from the same manufacturer that was supposed to build and deliver me the new boat. The tests before the races did not go well: the boat was unstable, the seat too high and the helm much more different from the one I was used to. But I had gotten up to that point, and I was not going to turn back for some technical problems. The first race was the 1000 meters one; I was excited and tense. When the start signal was given, I only thought about paddling and not falling in the water. I made it to the finish line, happy to not have fallen into the water. I ended up in third place: I had won the first medal in my first Italian competition. I raced the 500 m with a different spirit: with more confidence and I took the second place. In the 200 m I was incredibly nervous, and when I heard the start signal I was out of the blocks. I had to do a race to the recovery instead of a race to the victory. When the race was finished I was angry and disappointed, despite another third place. I could have done better. Once the storm of emotions ended a few hours later, I realized that I started the races as a debutant and I was going back home with my first three medals. My boat was delivered a month later.

The biggest surprise arrived in February 2017, when I won my first Italian title in the 3 km long-distance race and more gold medals in other distance. After that, the Italian Federation included me in the national paracone team.

I trained with the team to prepare for some important dates: the world cup in Hungary, the european competitions in Bulgaria and the world championship in Czech Republic.

In Italy I was in the KL2 paracanoe category and, according to my racing times, in the world cup I could have classified in the first half of ranking A. Once in Hungary, the classifiers decided I was somehow able to use my legs to push myself during paddling and they moved me in the KL3 category. This meant I was never going to make it in ranking A. All of my opponents had the advantage of using their legs, so I classified in fifth position in ranking B.

I did not get the results I wanted during the europeans in Bulgaria, but I took the sixth place in the world champions in Czech Republic even though I didn't classify in ranking A for less than a second. I returned home enthusiastic for the new experiences, and more determined than ever to train to do better.

After the international races, I raced in the 2017 Italian Championship. This time I was more prepared and I had more experiences, I was not scared or nervous. I had my mind set on winning at least two gold medals, one necessarily in the 200 m, and so I did. I took the first place in the 1000 m and I gave less importance to the 500 m to be more rested and concentrated in the final 200 m race. I managed to bring home two gold medals and a silver one. This time I was satisfied!

Canoe is a sport that never ends, I train all year log because me, my coach and the members of the national of paracanoe team have a project to carry out. We have a goal to reach: in the 2018 and 2019 competitions we want to improve our ranking position and qualify the boat for the 2020 Tokyo Olympic Games.

All of the results that I gained in the past and, hopefully, that I will reach in the future are not merely my merit: they are the fruit of my adoptive family, who always loved me, comforted me during hard times and encouraged me to never give up and to always keep going. Thanks to my club, Società Canottieri Lecco, to my coach Giovanni Lozza and to the Volchem company, without whose support I would have never made it to where I am now.